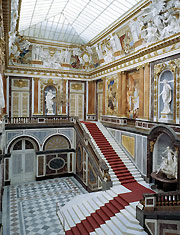 For Americans prone to breeze through the Chiemsee in a day, this mountain lake is known as the site of King Ludwig II’s Herrenchiemsee. Period. For Münchners, though, the region is a splendid retreat, the place to spend idyllic days enjoying nature, hoisting a liter of local beer to keep the elbow muscles in shape, and devouring platters of fish fresh from the lake. So take a hint from the locals and spend a few days discovering this region that offers so much more than the obvious attraction of Herrenchiemsee Palace.

Prien am Chiemsee, a pleasant town on the lake, with frequent train connections to Munich, is the best place to begin. Before heading to the lake, though, catch the narrow-gauge train that runs on a track adjacent to the train station’s main rail lines. Get off three kilometers south of Prien at Urschalling to visit the church of St. Jakobus (St. James in English). Now a tiny farming community with a few houses, a Gasthaus, and a church, in the Middle Ages Urschalling was a way station on the pilgrimage route to Campostela di Santiago, the shrine on Spain’s coast that held the relics of St James. St. Jakobus is the remnant of a 12th Century fortress built by the Count of Falkenstein, a member of one of the most powerful medieval Bavarian families.

From the outside, the church, crowned by an onion dome atop an elegant steeple, appears to be a typical village church. Enter, though, and the last nine centuries melt away. The interior walls and vaulted ceiling are profusely decorated with a cycle of frescoes painted in the 12th and 13th Centuries. Created for a largely illiterate population and painted most likely by a local painter, the frescoes illustrate the promises of salvation in a way that even the simplest peasant could understand.

Standing in the rear of the church, survey the walls and ceiling. First, look on the right wall near the back for the man hanging in a noose. His story? He was a local boy who accompanied his father on a pilgrimage to Spain. They stopped in a village along the route, where the young man made the the mistake of refusing the advances of a rather forward woman. To spite him, she hid a chalice in his bag. He was caught, tried, convicted and hung. His father continued to Spain but on his return journey, passed through the same village, only to discover his son still in the noose, but miraculously very much alive. The father freed the son and the reunited pair continued the journey home.

Now, look at the frescoes decorating the ceiling and walls. Notice the higher than usual number of women in the paintings. Then look to the front of the church, on the spandrel to the left of the apse. Three figures emerge from a central core: the Holy Trinity. The Father and the Son are easily recognizable but the third figure has distinctly female characteristics. Is the Holy Ghost meant to be shown as a woman?

Ponder the meaning of these frescoes over lunch next door at the Mesner Stub’n, a restaurant owned by the Blank family since 1913. The menu of Bavarian dishes and beers complements the atmosphere of the 17th Century building.

Return to Prien for a quick look at this lake-side town that caters to tourists and those seeking the cure. The ferry docks are about a 20-minute walk from the train station. Buses and taxis run the route as well, and are a better choice for anyone lugging a heavy bag. The docks give a clear indication of the volume of people that pass through during the peak tourist season. Keep this in mind when planning a visit.

Ferries leave regularly for the lake’s two islands, Herreninsel and Fraueninsel. Find a seat on the open deck so you can enjoy unobstructed views, particularly a glimpse of King Ludwig II’s palace at the end of a precisely manicured allée, visible shortly after the ferry departs its dock. Have cameras ready for action—not only to catch the palace view, but also to capture the sparkle of sunlight dancing on the water and the sun backlighting sails as boats dart across the lake.

From the dock on Herreninsel, an easy 20-minute walk along a wooded path leads to Ludwig’s palace, Herrenchiemsee. The island’s best known attraction is surely one of the most expensive knock-offs in history. Ludwig and his architect, Georg von Dollmann, did their best to recreate Versailles, complete with gold, crystal and mirrors. Tischlein Deck Dich, the table that could be loaded with china, cutlery and food on the lower floor and then raised to the floor above where Ludwig would dine in regal but lonely splendor, and the Hall of Mirrors are longtime favorite attractions.

June 13, 2011, marked the 125th anniversary of Ludwig’s death in the Starnbergersee and in commemoration, Bavaria has prepared a state-wide series of exhibitions that runs until October. At Herrenchiemsee, visitors will see what lies behind the splendor of the Hall of Mirrors: the vast, empty, unfinished part of the palace, usually closed to the public, that exudes a sense of melancholy for what might have been. Be sure, too, to visit the museum at Herrenchiemsee, to move beyond the usual clichés that distort the story of Ludwig II.

After emerging from the palace, take a walk along the island’s shoreline just beyond the deer park for some photo contest-winning vistas and insights into the island’s ecology. On the way back to the ferry, climb the hill to the former Augustinian abbey. The complex still preserves the bedroom that Ludwig used while waiting for his palace to be completed as well as a vast kitchen that hints of the earlier bustle of monks preparing meals to fuel a working monastery.

From the monastery’s perch, a near-by island beckons. A short ferry ride brings visitors to the less-visited Fraueninsel. The island is dominated by Frauenwörth, a Benedictine cloister established in the 8th Century, its church tower, with the lower part dating to the 11th Century, and a 12th Century Romanesque church. The tomb of one of Charlemagne’s granddaughters, Irmengard, who served as an early abbess at the cloister, is still lovingly cared for today. Nearby stands one of Bavaria’s oldest structures, a Carolingian gate house with surviving interior frescoes built in the mid 800s.

German-speaking visitors who would like to take advantage of Fraueninsel’s lack of cars and traffic noises may be interested in the abbey’s seminar programs. Choices this year include sessions on Ayurvedic cooking, drawing, and calligraphy as well as health and spirituality. English-only speakers can opt for overnight accommodations at the Hotel zur Linde, just a few steps beyond the cloister.

A path runs along the perimeter of the island, past the cloister’s gardens and homes of fishermen and artists. Boat houses and small docks line the shore and the island’s fisherman often spread nets in their yards to mend tears. A few shops selling local, handcrafted ceramics and glass may tempt a buying spree that will lighten the wallet but add weight to baggage. Yet more selections can be found in the cloister gift shop that sells books and handcrafted foods such as jams, Lebkuchen, and marzipan from the convent’s kitchen.

A small vineyard tantalizes passers-by but stops short of delivering satisfaction: its wine is not sold on the island. A few steps beyond, though, frustration is forgotten. At Inselbräu visitors and islanders alike gather to sample seasonal beers brewed on the island. Small restaurants and beer gardens plus Klosterwirt, the restaurant owned by the cloister, offer plenty of choices to feast on Bavarian specialties and the impeccably fresh fish from the lake.

Enjoy the Chiemsee’s offerings: the lapping sounds of the water, ancient buildings that survive from Bavaria’s early history, sunrises that peek above the mountains and throw blazing shades of red, pink, orange and purple across the lake, birds chattering in the cool dawn and ducks quacking to each other as they plunge headfirst into the lake for a breakfast bite...these are sights and sounds of the Chiemsee just beyond the frenetic tourist destination of Herrenchiemsee that will linger with you as you head back to Munich or anywhere else on your journey. — Margie Gibson